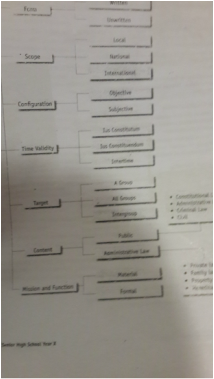 During civics this quarter we learned about law classifications, which are laws that are actually classified and we learn how they classify the laws in Indonesia. our only assignment for civics was a test, we are not given yet our test yet that is why i post a paper of what we studied for the test.

The subject that could be related with civics is only humanities, as this quarter in humanities we learned different type of government and the relevance of their laws just like what we learned in civics which is the classifications of laws.  This are connected because we should follow the rule.

The development of concept, skills and attitude.  The concept i learned from this topic was how Indonesia classified their laws. The skills i develop during this test was critical thinking where i should  think critically in order to solve the problems in the test. The attitude i develop was knowledgable because i gain new knowledge on how they classified the laws.
Powered by